When rearing Silkworms, it is of the utmost importance that you practise good hygiene methods. This means washing your hands with soap – and drying them – before coming into contact with your Silkworms and their enclosure. This will prevent the build-up of bacteria and in turn diseases.

No-matter the enclosure, it is vital to ensure it is kept clean – as alluded to above. If your worms are kept in a shoebox, you should ensure the bottom is lined with paper-towel / cloth, and that it is changed regularly – before it becomes soggy. If using a plastic-tub or fish-tank, it is important to make sure you clean it thoroughly with soap and water before starting the life-cycle. It is also suggested that you also line the bottom with paper-towel / cloth too, as this makes it easier to clean their droppings – which will be a regular occurrence as they grow.

The first point that must be made is that all diseases can be avoided if you feed your Silkworms fresh Mulberry Leaves – regularly – and minimise the number of worms in each housing area, coupled with following the hygiene practises mentioned above. Examples of the different types of diseases that can be contracted by your Silkworms are below, as well as suggested ways in which to prevent them from spreading, occurring and how to deal with a diseased Silkworm.

Usually occurring towards the end of the worm’s life-cycle – in the fourth of fifth instar – flacherie is when the Silkworms appear flaccid and growth is stunted. If contracted during the fifth instar, worms will cocoon and fail to emerge as moths. When dead, the worms will petrify.

It is important to move all healthy worms to a new enclosure – not vias versa – as healthy worms will walk over them, leading to the disease spreading.

It can be prevented by ensuring breeding temperature is kept between 21 degrees celsius and 27 degrees celsius, as well as a humidity of less than 70%. Silkworms appear sluggish, and will not cocoon – eventually dying in normal cases. However, if the infection level is only low, they will in fact cocoon and will die as a pupa.

Again, it can be prevented by ensuring breeding temperature is kept between 21 degrees celsius and 27 degrees celsius, as well as a humidity of less than 70%. 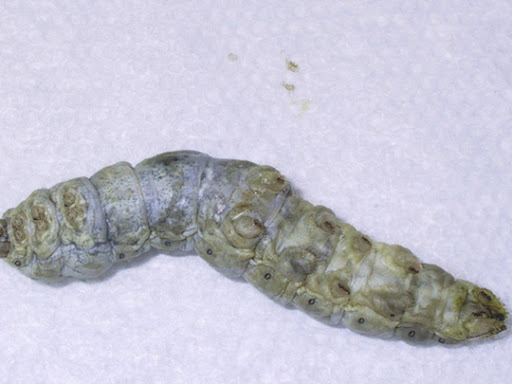 Visually, it is a lot easier to identify a Silkworm that has fallen to white muscadine – as opposed to grasserie or flacherie. This is because the Silkworms will appear brittle, light and white – mummified.

It is more common in the colder months – Winter – and can be prevented by ensuring leaves are free of insecticide and insects.

An interesting fact, is that this disease is taken advantage of by traditional Chinese medicine – often being used to dissolve phlegm and muscle spasms – and can be found on many online Chinese stores.

There are many factors which can lead to eggs not hatching – however these are quite obvious, such as exposure to water or overly warm temperatures. As a result, ensure they are exposed to 12 hours of daylight and sunlight per day, a temperature of 23-28 degrees celsius, as well as humidity levels of 85-90%

Your Silkworms will appear shrivelled, and is most likely to occur as a result of being underfed or dehydrated. It can also come from overexposure to heat or moisture.

Most likely to come as a result of an ant attack, however in warmer areas such as WA or QLD, it may come from other insects too. A good solution is to rear your Silkworms in a plastic container, and let it sit in a larger container, which is slightly filled with water. As a result, ants or other insects will not be able to reach the enclosure.