The most common type of Silkworm – Bombyx Mori – have been farmed so heavily for the past 2,500 years – all over the world – that they can no longer be found in the wild.

They only eat the fresh leaves off a Mulberry Tree, or artificial Silkworm food – Silkworm Chow – made predominantly from crushed Mulberry Leaves. It must be noted, that the quality of Silk and mortality rate is much improved when worms are reared on Mulberry Leaves – as opposed to Silkworm Chow.

The most common reason for rearing Silkworms is for the extraction of their Silk – however this is only a worthwhile enterprise when raising thousands upon thousands of Silkworms. For example it requires over 2,500 Silkworms to produce just 1 pound of Silk, and one tie alone requires almost 150 Silk cocoons. In Asian countries – where most Silk comes from – most farmers raise in excess of 200,000 to 1,000,000 Silkworms at any one time. 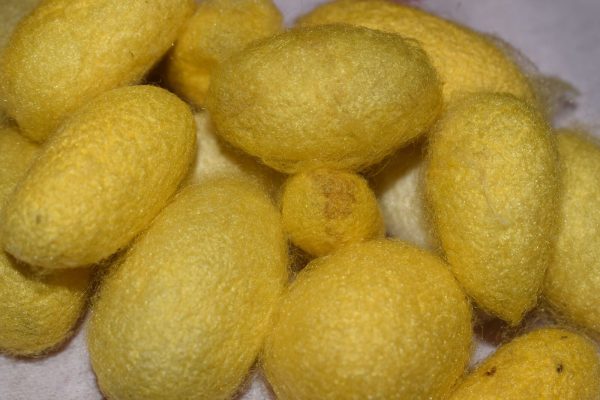 Street vendors in China roast the pupae. The Chinese also use the dried bodies of silkworms to produce a medicine intended to relieve flatulence and bodily spasms as well as dissolve phlegm.

Domestically speaking, most people raise Silkworms as; pet feeders, domestic pets, school project topics, scientific studies, and edible insects. The life-cycle of a Silkworm is a fascinating one, taking just two months to complete (+ incubation time) from kego to moth. In the first month, as a worm, the Silkworm will increase its size over 10,000 times its original weight – more than any other animal!

For further reading as to why people raise Silkworms, have a look at the following article found on our site by clicking here. of course, if you have further questions regarding raising Silkworms yourself, do not hesitate to email us directly.